CWS welcomes rider Sister Janet Ryan, OSF, of Clinton, Iowa. She shares a story about how she came to be a Clinton OSF: “My great aunt, who was a Clinton Franciscan, always asked me to pray with her, ‘Lord, send more laborers into the field,’ which I did, fervently, years before becoming aware of my vocation and of her intention of my being one of those laborers!” 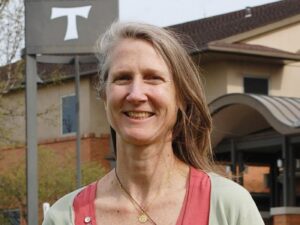 Sister Janet works with the Precious Blood Ministry of Reconciliation in Chicago (South side!), overseeing the high school diploma program for adults. She also promotes restorative justice, nonviolence, and facilitates peace-circle trainings. She is excited about cycling with other religious to bring awareness to issues of justice to which women religious are deeply committed.

During the ride, she will be holding in prayer the millions of refugees, migrants and asylum seekers throughout the world who have been driven from their homelands due to war and violence.